$31,- raised for Doctors of the World Greece

It was a bit of a slow (and short notice) fundsraiser, but $ 31,- have been raised for Doctors of the World Greece. Thank you for your donations, if you have made one! 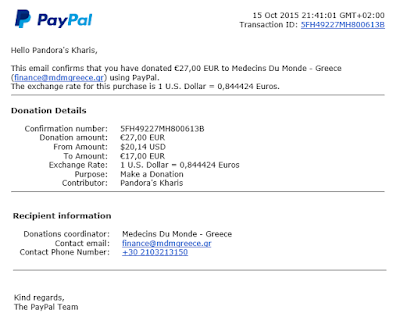 Médecins du Monde / Doctors of the World is an international Non – Governmental, independent, humanitarian organization, which was founded in 1980 by 15 French doctors that believed in bearing witness and providing direct access to medical care for the world’s most vulnerable populations.

The first and foremost mission of Médecins du Monde is to provide treatment. Actions though are not limited to medical care: always based on its medical experience and acting independently, MdM is vocal against the obstruction of access to healthcare and the violation of human rights and dignity. Firm supporters of human rights, they are against racism, xenophobia and the social isolation and marginalization of social groups.

These are the principles underlying the establishment of the organization «Médecins du Monde» which later began to spread in other countries (Argentina, Belgium, Canada, France, Germany, Greece, Japan, Luxembourg, the Netherlands, Portugal, Spain, Sweden, Switzerland, UK and USA), creating an international network of Humanitarian Relief organizations dedicated to provide medical care to populations while fighting for equal access to healthcare worldwide. MdM has become today an integral and important part of the international network of Non-Governmental Humanitarian Organizations.

From this moment on, pitches are open on the Pandora's Kharis Facebook page. You can vote for your desired cause until October 22, 2015. Thank you in advance!
Posted by Elani Temperance at 12:50 PM

Email ThisBlogThis!Share to TwitterShare to FacebookShare to Pinterest
Labels: donation